Antichamber is one of the best games I have played in a long while. I had waited, and when it finally came out, I played it for 10 hours straight. (actually I had a sleeping break...) This is a game between you and the developer/game itself. It will tease you and frustrate you, but it will also be a journey of exploration. A straight out first person puzzle game. For me, that was an enjoyable journey of discovery and showing me things I had not seen before. Providing a challenge good enough to leave me more experienced in life and imagination. The game is somewhat reminiscent of Portal, playing with space as it does, but this game will offer many more types of puzzles. If you enjoyed the gameplay of portal, you will most likely enjoy this. Don't expect some big story though, there is no active narrative. The game provides absolutely bare minimum of events that could be interpreted one way or another. I took it as a series of events that happened to me, the player, not my (invisible) avatar. Absolutely worth the purchase for someone who enjoys mind games, or someone tired of all the same games being released and re-released. This game is a great addition to the industry, I hope it will open game creators imagination of what is possible in games, to push the medium as a whole forward. Not only in terms of messing with space and linearity, but in the relationship with the player and the developers. Far inbetween are the games that focus so much on what they player thinks they are meant to do and what they try to do, a player rebellion. Sequence breaking being an intended outcome in this game, I took it as a challenge to break the game further.

You might not be able to tell, but the pictures below is me outside boundaries, I think. It is not "supposed" to look like this. Probably. 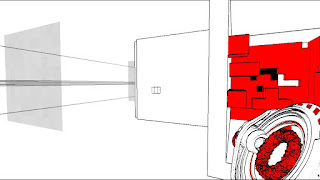 The museum room without the artwork in it. 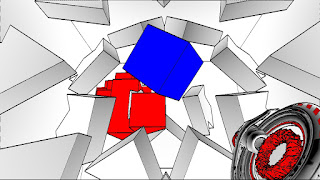 Inside an artwork in the museum room.
This blue cube should have been a real cube! >:( 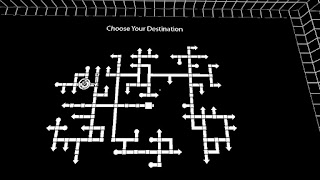 This is as far as I got. I am missing one room, I believe, this particular puzzle has me beat. Otherwise I am under the impression this map is complete.

Now. You should know a thing about me in relation to this game: I am absolutely terrified of Graphical errors. This game has a very unusual art style, the colours in itself makes the whole game feel like a graphical error. Every time I had to pass over a black spot, or a cube with sides that didn't exist, I had to battle with a strong feeling of uncomfortableness, it feels like a fear of heights. It was rather tense. Especially the end, none of the built up familiarity I gradually attained from getting used to all the graphical anomalies matched the visuals then. Yet as scary as it was, I also find graphical errors highly fascinating, and such set out on my journey to seek them out. I am still on that journey, so the game has not yet ended for me.
Posted by Sky at 5.2.13