This is a whole dream + analysis.
TL;DR? Skip to the "what does it mean" section.

I sat down to play goldensun. I am now inside the game as though it is my reality. I am in a team of unspecified characters. we battle a jinn creature by summoning gods. Once the gods defeat the creature, most of them leave but one. A party member voices his concern that the gods might die in battle. The god starts talking about how their existance is different, and how they won't die. 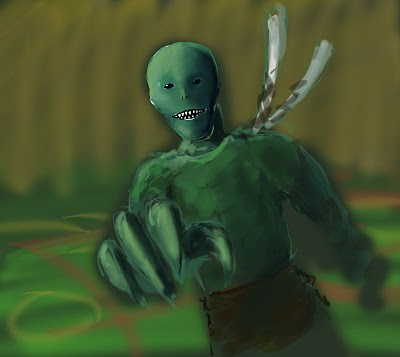 A wooden figurine appears. It looks like an eye. My group is inside a gymnastics hall, and looking for an exit. The wooden eye tells us that if we play a game with it, we can escape.

On all the walls there were now square hatches with tiny doors. large enough to crawl through. The eye devided the hall into squares. We had to find, open and escape through the right hatch without being seen. We would move on the squares like in a board game. The eye could see in a straight line. If it saw us, a yellow beam would shoot out and we could not escape the hall. I saved the game before we began.

My group members all escape out the hatch easily, and it is only me left. I am looking for something but cannot remember what. The others are shouting from outside the hatch. "There is no time!" I look through a heap of fabrics, blankets and scarves. What am I looking for?
I decide to get out, and climb through the hatch. a bright and comfortable cityscape is on the other side. But when I stand up, all of it blurs and blends and become the inside of the gym hall again. we were inside it all along. They Wooden Eye had decided I was late, and would not let us escape.

I took the wooden eye and put it in my front jacket pocket. It was scared of the dark, so I let it see out of my pocket. We walked back out of the Gym hall from the door we entered, into a city where it was night and a lot of traffic. My group walked across the street, but I had to wait for traffic to pass. Doing so, showed the Eye that I was a nice person.

After crossing the road, I made my way through crowds. A man was shouting that zombies were amongst us, and this applied particulary to me. I took offense at this accusation, and promtly showed him the wooden eye. 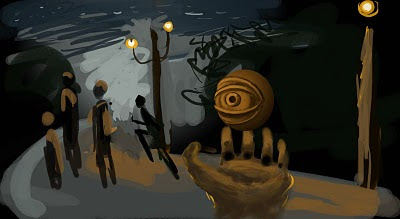 "Zombies are amongst us!" *flee*
The man started running, and I ran after him. He stopped in a park, under a streetlight. He had a table there were he sat down working with wooden figurines. They were tiny swans, with a hole on the back to fit Wooden eyes like the one I carried. I was surprised he had wooden eyes too.
I remarked to him how curious it was, that he had chosen swans for his eye containers, apparantly so had I, (despite not having had any time to carve my own swan, I now had a swan container and the memory of making one)

An old woman took interest. The Man said to her "they are all created to be perfect. The funny thing is, how do I know wich one of them I should listen to?"

What he meant by that, is despite the eyes being perfect beings they all were different, and would give different advice. (the eyes represented concience/morals, giving advice on what to do)

But what does it mean?
This final sentence is a metaphor for human beings and how we differ. There is no one perfect human, we all try to achieve perfection in different manners. Often we have fundamental differences in morals, but neither is right or wrong. Yet we percieve our own set of morals to be the "right" one. I am amused how this dream managed to put such a complex thought set into just one sentence, and it make perfect sense to me. I woke up in a state of epiphany and it influenced my attitude to how I treat others.


"zombies are amongst us": a person without a concience would be a zombie. The man was implying humans are putting away our conciences to function in society. making immoral choises to make our day slide by.
Posted by Sky at 27.8.10