You might wonder "what even!" this is, and I admit these hasty scribbles might be hard to understand. What you see here is Generic fleshmonster (left) Burned gasmask dude (middle) and Dragon royal guard (right)
Full dreams below. 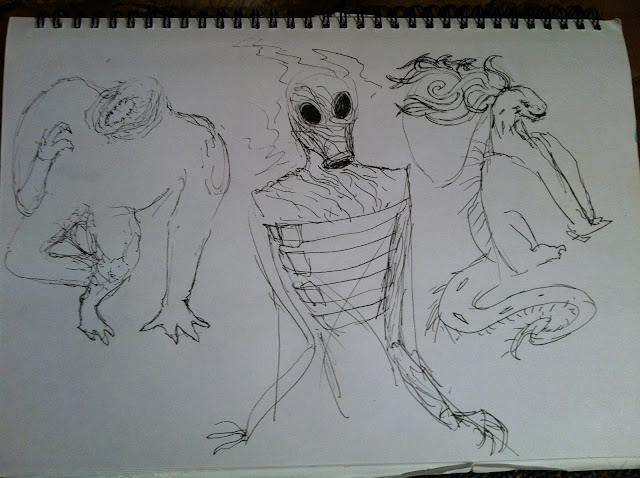 Dream 8th of march. Cause: Talking about silent hill, halo and hellsing (anime) before bed = nightmare.

I get the oppertunity to play the 'next installment of halo' and find myself with friends within a game world, fully immersed. Gradually as we play we find that this halo isn't a first person shooter at all! After all, we are in some sort of institution, insane asylum, school or maybe an office building, close quarters, having to avoid enemies and with no functional guns. The tone is paranoid and twitchy, having to time our runs in corridors to avoid being spotted or heard. As time pass on, my immersion overcomes me and I no longer remember it is a game, and the horror elements start to take over. Me and my friends huddle in a classroom like room, maybe 5 meters across, picking up any sharp objects we can find to defend ourselves against a horde of monsters we know have detected us. I find a long knife like object that looks a lot like the embalming tools from skyrim. It had a carved pencil like surface. I knew this was not really suitable for defending against melee type monsters who would batter or eat me, But what can you do? It was very tense. As the fleshmonsters approached, the lights started flickering and we find ourselves having to fight in darkness, and eventually a "boss" type character appeared. He looked nearly human, but much larger, with blue skin, wearing a suit. His eyes were large and red and could be expelled explosively from his head to act as poisonous splash damage bombs. He was very angry with us, and hated the fact that we were "similar" to him. By that I am unsure if he referred to us looking human, or having started to gain some paranormal like abilities (levitation, teleportation, telepathy) This being had mysterious powers as well, and started messing with our vision, turning everything flickering black or static. Since I could teleport, I managed to avoid the enemies for some time, but we were all herded into a smaller room with only a few meters of space to move, and we were about 7 people and 5 fleshmonsters at this time, so combat became necessary. I drove my embalming tool into the head of one fleshmonster's head, and my other sharp object into his shoulder. As our vision became more and more messed up, we were left to blindly wailing around us, stabbing anything fleshy we touched. How could I even know what I was killing anymore? A collective feeling hung over us that it was really a matter of all for their own, and so we were killing our friends as well as enemies. Quite dire and very sad. Once the hordes died down, there were only two of us still alive, me and another girl. Oddly we were not particularly emotionally impacted buy this and proceeded to escape out from the generic creepy facility. Long rusty hallways later, we were outside a enormous dam with rusty bridges going across it. Masses and masses of people were exiting, and it seemed we were not the only ones going through hell. Above the dam, a few human silhouettes could be seen flying. I met my brother on the thin bridge, and we walked towards safety trying to find a place to rest, but I never quite felt secure.
Then I woke up!

9th. This dream was really long, and I don't remember much of it, but whatever.
Someone showed me what "game of thrones" was, it turned out to be some sort of story (game,video) about conflicting nations, except the nations were all very very different and not at all human. The first nation I went visiting were an underwater sort of atlantis people, mostly humanoids but some dragon-turian things (depicted right in picture) The second place I went to were humanoids with magical powers and witches. There were also a cyborg tribe and a jungle tribe. I had to go back and forth and relay information between the peoples. The magic humanoids had killed their royal dragon without the queens permission (corrupt advisor ordered it while she was away or asleep or something) and I went to warn the atlantis people and not have them kill their dragon. The dragon that was killed was turned into a feast meal, I got to try some. It was like chicken skin filled with white rice and beans and tasted pretty good. Yum dragon. The deus ex cyborg guy had lizard cyborg feet and had a one night stand with an evil witch. He woke up in her bed not remembering anything and talked to his miniature lady conscience/AI thing (woman with golden feathers) He really could not figure what happened, probably got cursed.
Then I woke up!
Posted by Sky at 10.3.12