It's that time again, Ludum dare 33, our favourite game jam, had been and gone.

The resulting game can be seen here: Pokemen - Ludum Dare 33

The theme: "You are the monster". I took the familiar concept of Pokemon, everyone's favourite monster battling game, and replaced the monsters with "pokemen" instead. In my design, you control the monster directly, becoming a literal interpretation of the theme at first. However, as the battle progresses, you can see your trainer off to the side shouting commands and encouragement. After a while the trainers dialogue will become progressively more abusive. The worse you do the more abusive the trainer becomes. The pokemen battle to the death and we attempted to implement some gore. This way, it is actually the pokemen trainer who is the true monster, for abusing their slave pokemen.

The game plays a bit like a 2D fighter. tzer0 did all the programming and sound and definitely worked the hardest of us two. Next time I'd like to find one or two more people since the time really doesn't stretch that well in such a small game jam.


I was hoping to beat my Ludum Dare rating from my last game "Escape from Animal forest" but we somehow did worse on all scores. This I find somewhat disappointing since I tried much more to work hard this time around. It just goes to show that effort does not always equal output. Many of the small decisions and shortcuts I had to take left this game looking less interesting than the last one. I'll list some reasons I suspect we had a worse result here for my own reference next time:

Below is my journal of this Ludum Dare proceeding for those interested:

I started early this time, one day ahead so I could test my setup. That was wise, as I had to update 7 programs (all adobe programs i use plus krita) plus one bug fix in krita. Besides I had to dust off my Krita - photoshop workflow. I rely on Krita for game making because of it's wrap around mode, mirror drawing, and generally the brush engine just feels easier to sketch with for some reason.

I drew my first pixelart in my testing. I MAY have been inspired to do so because I saw this cool artist just the day before: CELLUSIOUS his pixels are worth the watch. Pixels is really fun to work with because it frees me of my bad habit of getting lost in details. 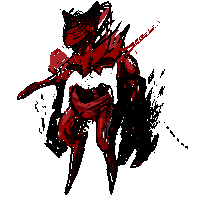 Also played around with a screenshot of mario to see how it works and speculate about why it looks like it looks. I'm not fond of the style but I wanted to see what it could take to make Mario surreal. I like how I accidentally touched upon a potential answer to the theme that was chosen. 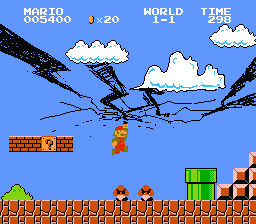 The theme this time around is "You are the monster"

Here is my 5 o'clock rambling list of ideas that I woke up to write (including spelling mistakes!):

Sheep or wolf u font know

I think this theme is going to be fun, even if there will be a lot of obvious takes on "you are the monster" it will still be fun.

Once the game making actually began I rediscovered timeslotting. I had to complete

By dividing each task by the total time I had, I ended up with only about an hour or two for each task. ( I could not use the full LD time due to work)
Long story short, I had 7 minutes per frame of animation and I could only afford 2 frames per action (jump, attack, run etc). It may seem like a long time for just moving a few limbs, but I am not very experienced with animation OR pixel art so this felt like a very short time when I was actually doing it. Photoshop tricks like "transform" does not work with pixel art. pixels don't rotate (unless it's 90 degrees i guess). Some frames took less and some took more.

All in all the project was as tiresome yet educational as gamejams always are for me and I will take my experience forward.